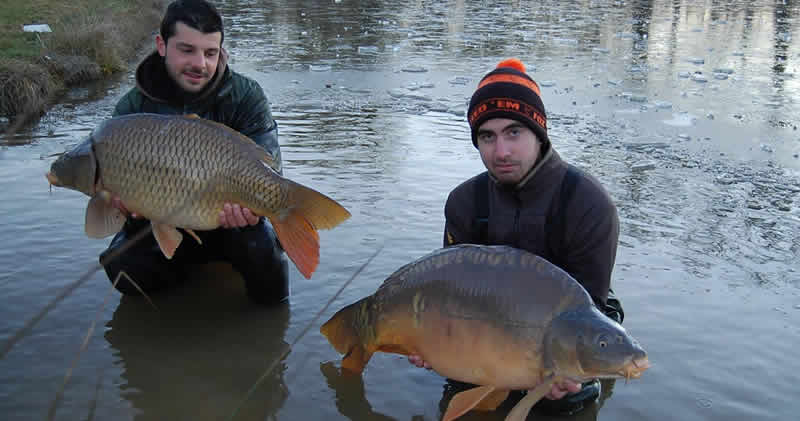 After months of planning and preparation Lac de Villedon underwent a FULL draindown and then netting on 7th January 2017. The lake had gradually been drained over the last 2 weeks to leave a large basin at the deeper dam end of the lake.

Following coffee and breakfast at 7.30am on day 1 the 25 strong Villedon team comprising of Villedon owner and staff, fish farmers and dedicated local supporters of the venue were greeted by the site of the main basin being frozen following a night of -4 temperatures.

I really expected the fish farmers and owner to have to abandon until the following day but NO, boats were rowed independantly across the basin in straight lines 10 metres apart to form channels in the ice, it was then time to get into the water and 3 independant sections of ice were pushed back underneath each other to leave a deep basin free from ice.

The netting of Villedon is a very organised and complex process. Damien David took time to explain to the team their individual responsibilities and re enforced the golden rule 'If you dont have a job, get out of the water'. This is important as it keeps to a minimum the amount of silt disturbance in the basin. At the rear of the basin a small neck of water had formed with a tiny pool located behind it and 10 fish had become stranded in this bit of water. Loading the boat with un hooking mats it was pushed toward the pool of water and the 10 remaining fish loaded safely into the boat. It was very interesting to find that this small pool had a polished sandy base that had been cleaned by the carp (it is approx 100 yards in front of the villa swim 1.) With any carp outside of the net rescued the main netting process could begin. Several sweeps of the net were undertaken over 3 days incorporating Monday. Once a small purse had formed at the back of the net and support posts added on each occasion the selection process could begin.

Firstly nets were run around the perimeter to remove silver fish as these are most vunerable to the drop in oxygen created by the silt. Four hand nets worked tirelessly throughout the morning removing poisson chat and silver fish to crates that were then presented to the pre assembled sorting stations for the dividing of Poisson chat, roach, small carp; perch, sander and black bass. Once sorted by hand these fish fish were then delivered to their nominated oxygenated stock ponds and the roach went to the fish farmer into his holding tanks. By 2pm we were requested to make our way to the Villedon restaurant, a welcome opportunity to dry waders, gloves, boots etc in front of the roaring wood burner. Our sincere thanks go to Mimi for the excellent cuisine.

The afternoons were the event most held in eager anticipation as the net was drawn closer and the carp picked out by hand, placed on cushioned floatation mats and floated to two nominated persons who transferred them to padded trailers linked to tractors, this process ensured the fish were handled to a minimum and moved as quickly as possible to their allocated stock ponds. ALL carp under 20lbs were removed to one of the rectangular aerated ponds by the restaurant and ALL 20lb plus carp were taken to the larger stock pond located closer to the car park.

This report is accompanied by 85 pictures of this process and the movement of these immaculate fish and also some video. These can be viewed on our Facebook page.

Over the four day period 10 tonnes of roach were removed and 2.5 tonnes of poisson chat. The large carp remain in the stock pond until 21st January (water and rainfall permitting) when we are able to spend several days recording their return to the main lake.

On Tuesday 10th afternoon with ALL carp removed the monk was opened fully to allow any remaining poisson chat to filter through from the lake to the stream which is grilled completely at two different stages. Two netsmen then cleared the grills of any fish by hand to waiting containers for onward transportation to stock ponds. Any silt pools together with the dam wall are now being limed and the lake level will be allowed to rise a few feet and then re flushed a further two or three times.

The four days has been murderously hard work and our heartfelt thanks goes to EVERYONE involved. This report has not been written as a promotional marketing tool, it is simply our best efforts together with the venue to give our customers old and new as much information as possible to be able to make their own individual decisions and should you choose to visit Villedon we very much look forward being of service to you.

The bookings are very busy, just a quick heads up to help you plan your Villedon trips, April is now booked solid and May is also going the same way as well as September. Please contact us now with dates and amount of anglers in your group to ensure we can accommodate you on the swims of your choice. This email address is being protected from spambots. You need JavaScript enabled to view it.

Full pictures of the netting and flushing can be seen on our Facebook page, together with pictures of some of Villedons beautiful big fish!